CLOSE TO HOME: ON WRITING THE ECHIDNA NEAR MY PLACE 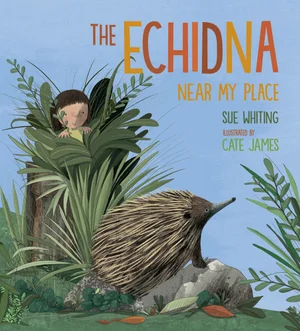 It has been a VERY long time since I last blogged. But today, for whatever reason, I felt compelled to share a few thoughts on the writing of my latest picture book, The Echidna Near my Place, illustrated by the amazing Cate James.

Story ideas can come from the most unexpected places and at the most unexpected times and some take a long time to percolate and to transform from being an “idea” into a story. The Echidna Near my Place ticks all these boxes. The event that sparked the idea was very unexpected and it happened about twenty-five years ago – maybe more! Yes, some stories are a long time in the making.

You see, the book The Echidna Near my Place is the story of the echidna near my place, quite literally. We first spotted the echidna when my kids (now adults, then primary school age) and I were walking up our street after a morning at the beach. To our combined amazement, a spiky brown short-beaked echidna was taking the same journey, waddling up the bitumen a couple of metres ahead. The kids were super excited and I said to them jokingly, “Maybe it’s coming to our place for morning tea?” At that point the echidna took a sharp left turn, clambered across our front lawn, up our front steps, onto our front verandah and to our front door. We all watched with open-mouthed astonishment. It sniffed around the front door, then lumbered back down the steps across our driveway and up our side path. 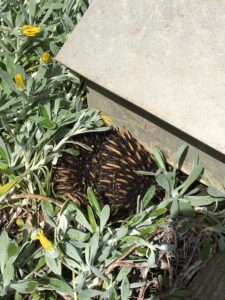 The echidna hiding under our letterbox. 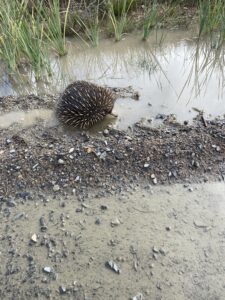 The echidna crossing the beach lagoon.

This was before the days of camera phones, so I dashed inside and grabbed our (film) camera and followed it up the side path, where it was digging itself into the soft dirt under our house beside the back gate. I took a few shots and then let it be.

It was a family event that made its way into our “family stories”. The “remember when …” type stories. Over the years, I have had numerous encounters with the echidna. It has waddled across my back lawn and hid in the agapanthus; it has sat right on top of my letter box! I have followed it walking up our road. I have seen it crossing the beach lagoon, and have watched it picking its way across the bushy paddock at the end of our street.

The echidna has never stopped fascinating me, especially as I discovered that this unique animal cohabits with humans in urban-ish areas quite well. How wonderful that we humans and echidnas can live side by side!

I knew one day I would write it all down and make it into a book. Which twenty something years later, I did! First, in my writing journal, one morning when I was writing my morning pages, and then a year or two later when I stumbled on my scribblings and thought, heck, this could be moulded into a Walker Nature Storybook: a series of beautifully illustrated picture books that combine narrative non-fiction and factual texts; a series I loved, that I had edited numerous titles for and had already contributed one title as author: Platypus, illustrated by Mark Jackson. A book on an echidna, the only other monotreme on the planet, seemed such an obvious choice for me. Why hadn’t I done this sooner?

I had the narrative drafted out in my notebook, so then I had to embark on my research, which, luckily for me included a day with the zookeepers at Taronga Zoo  as part of the NSW CBCA Curious Creatures, Wild Minds Book Week 2020 initiative, where I got not only to fact check my manuscript, but also to pat an echidna for about half an hour or more. (Incredibly soft, if you are wondering.) I meet the echidna at the four-minute mark below.

Walker enlisted the talented Cate James to illustrate the text – and she did such a brilliant job. Here’s a sneak peek. 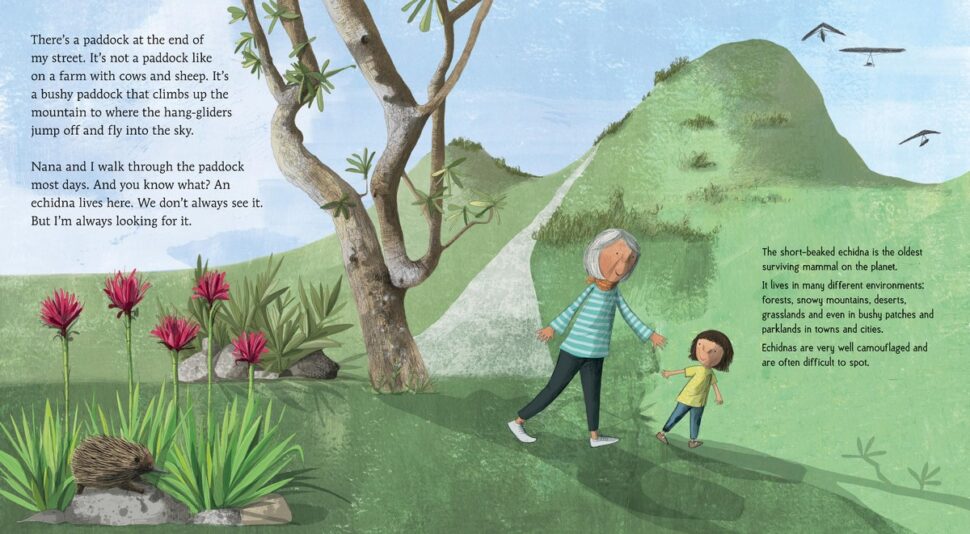 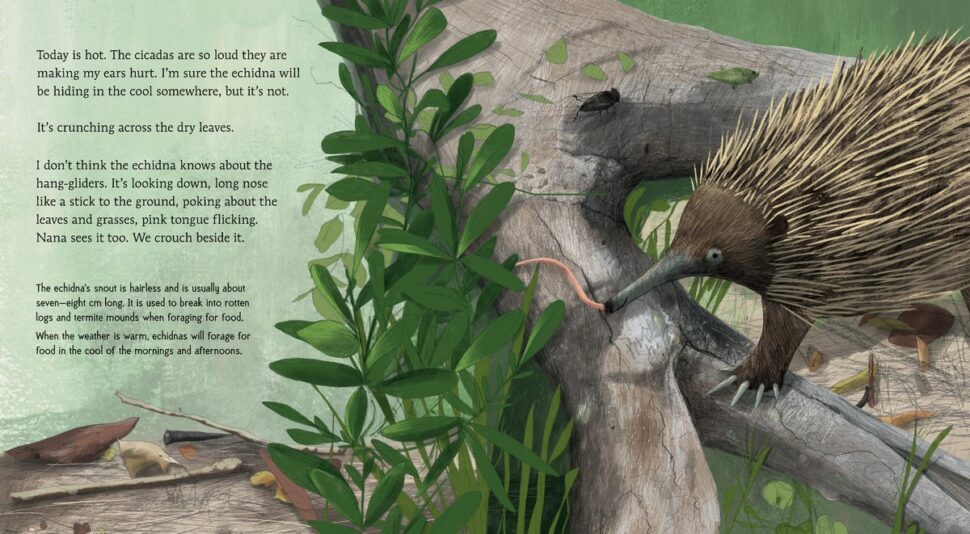 And, the rest, as they say, is history.

Twenty-five years + from initial idea to finished book, but hopefully worth the wait!

(Teachers’ notes can be found here.)