HOW TO USE GOOD QUESTION: A TALE TOLD BACKWARDS AS A MENTOR TEXT 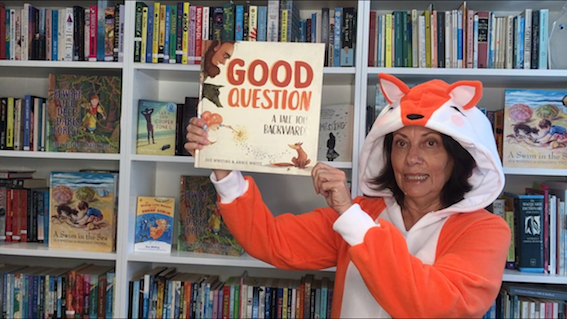 As both a writer and a teacher my go-to for inspiration and information has always been my favourite books.

The writer in me habitually “reads like a writer” – examining and analysing authors’ decisions and choices, identifying the structural bones, the narrative drive, the character arcs, savouring beautiful imagery or perfect sentences, collecting treasures and searching for the magic within the pages.

The teacher in me constantly reaches for great books, especially picture books, to use as mentor texts when teaching writing. What better way to deepen ones understanding of the writing process than by examining the writing of others?

I have blogged before about the value of picture books as mentor texts, and on how to use Beware the Deep Dark Forest as a mentor text for story structure and language use, but today I thought I would put the spotlight on my new picture book, illustrated by Annie White, GOOD QUESTION: A TALE TOLD BACKWARDS and explore which elements of the writing process it may help to illuminate.

In many ways GOOD QUESTION could be considered a fractured fairytale. The story certainly contains many fairytale characters and references for readers to identify. The fox narrator stumbles from one fairytale to the next – all of which have no place for him. He is told he is the wrong story! Why is he considered not to belong? Well, that could be an interesting question for young readers to explore. Another might be: how would the fairytale change if there was a fox in the story? For example, what could happen if a fox was hiding out in the second little pig’s house? How could this change the story? Or what could happen if there was a fox at the Grand Ball? Would the story change?

One of the key elements of the sequence of events that create a narrative plot is the notion of causality, or cause and effect. One event causes an action or reaction that leads to the next event, which causes the next event and so forth, creating a type of chain reaction that moves the action forwards.

In GOOD QUESTION, the story is told in reverse, with the fox narrator explaining all the reasons (the chain reaction) that has lead him to be hiding up in a tree. The narrative is framed by a series of “why” questions (“why” questions being the most important questions when plotting a narrative) followed by the fox’s explanations, providing a clear example of “cause and effect”.

Through identifying these cause and effect episodes, the causality of the plot is illuminated. A worthwhile follow-up activity could be for the students then to tell the story from the beginning, or perhaps to storyboard it like a comic strip.

The fox was hungry so he chased the mice.
The mice became carriage horses so he was whisked off to the Prince’s Grand Ball.
The fairy godmother said the fox was not allowed at the ball so she magicked him to the forest before he could eat anything.
In the forest he smelt porridge so he followed the scent to the three bears’ cottage.
The bears …

The story is told entirely from the fox’s point of view – it is in effect his monologue, his telling of his sorry tale.

This allows many opportunities to explore point of view generally, the language choices made and also the notion of character bias.

I would love to see the story developed as a play script! That could be fun.

If you are interested in further activities TEACHERS’ NOTES can be accessed here.