WRITING AND REWRITING THOSE MEASLY 500 WORDS 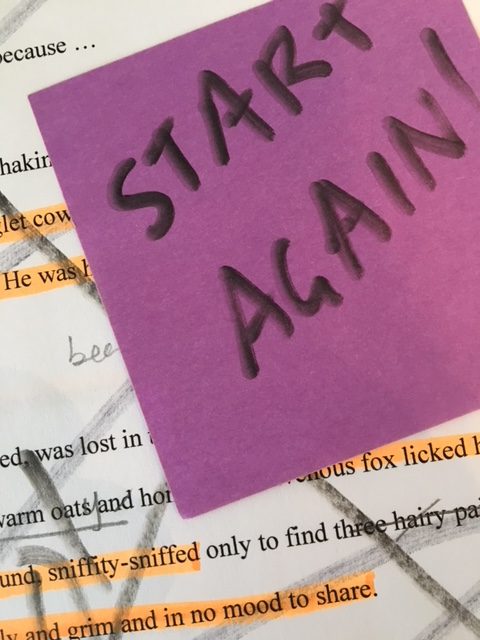 I think it was my good old friend Ernest Hemingway who said “The only kind of writing is rewriting.” And ain’t that the truth? Proven to me in spectacular fashion in last weeks of 2017.

Earlier in the year I blogged about writing picture books and how hard writing 500 words can be. (It was one of my most popular posts in 2017, so I guess there are a lot of us wrestling with this.) At the time I was tearing my hair out over one measly line. I had written and rewritten it umpteen times until, after hours of hard slog, it started to sing. I worked on this manuscript for many months. Writing. Rewriting. Finessing. Making dummy books. Reading it out loud. Recording it and listening to it back, until at last I felt it was ready to show my agent.

Happily, she loved it! Unhappily, my publisher wasn’t so keen. She felt it was clever and unique, but sadly not clever and unique enough for her to want to publish it. Whoosh! There I was hurtling down that rollercoaster once more.

So my agent sent it to another publisher. Her feedback was filled with encouraging words such as “lovely language” “captivating” and “very clever”. But for whatever reason it still wasn’t enough.

At this point I took stock – something wasn’t quite right. Maybe I was being too clever? I had to make a choice – keep on sending it out or rewrite it AGAIN.

I chose to rewrite. Well, in truth, the manuscript made the decision for me. Because it kept showing me ways to improve it. And I’m not talking about tweaking a line here or changing a scenario there – I mean taking that clever idea, giving it a good old shake and telling it in a totally different way. So this is what I did. Many times. So many many times.

Eventually, I came to realise that the story idea might be clever and unique, but the execution lacked character and heart. This was my light bulb moment during a dreamy morning gloaming. So in the light of a new day, I threw all the words into the air and rewrote it once more. This time quite quickly because I had worked on it so much I knew the character like a childhood friend – I just had to let him loose and give him his own voice.

So, the good news is that after months of REWRITING and RETHINKING and REWRITING those measly 500 words, my agent AND my publisher loves this new version and an offer was made just before Christmas. (A lovely Christmas present, that’s for sure.) The other brilliant news is that Annie White has agreed to illustrate it. Annie is illustrating my picture book BEWARE THE DEEP DARK FOREST and it is looking delicious! (Out in October.)

I reckon I have written 10000 words to get to these 500 and I know there will be more editing to come.

But you know what Ernest says: THE ONLY KIND OF WRITING IS REWRITING.

17 comments on “WRITING AND REWRITING THOSE MEASLY 500 WORDS”